How to Make Tinkers’ Construct Casts on Minecraft

If you’re a gamer, you know that making your own equipment is half the fun. And if you’re into Minecraft, then you’ve probably encountered Tinkers’ Construct at some point.

But how do you make casts in Tinkers’ Construct? We’ll share the process and a few tips in this guide!

How Do You Make Casts in Tinkers' Construct?

Metal tool components are produced by the Smeltery using casts. Start by placing a stone tool component, such as a pickaxe head, on a casting table connected to your smeltery.

Then pour some gold, brass, or aluminum on the table. The tool component will be encircled by a Cast. Your cast is ready to be filled with the metal of your choice when the stone portion has been devoured. 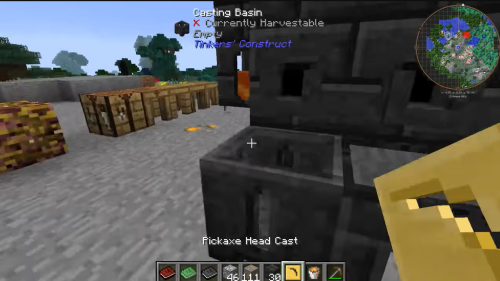 All tool parts, with the exception of the bowstring and the fletching, can be cast. You can also make ingot and gem casts.

The ingot cast requires any ingot. Emerald is necessary for gem casting (the emerald is not consumed in the process). A clay cast is an alternative to a cast. These casts are created using molten clay in the same manner as a typical cast, but they only have one use.

This indicates that the cast will break after only one usage. Making a cast takes the same materials as making the part.

How Do Casting Channels Work?

The Casting Channel functions similarly to the BuildCraft fluid pipes [1]. One may be directly connected to a Smeltery Drain, and you can extract liquid by right-clicking the channel.

The Channels can also be positioned just below a Seared Faucet. It is made from a material called Seared Brick and is shaped like a boat.