If you’re a fan of the game 7 Days to Die, then you may have heard of Valmod Pack. But what is it? Essentially, Valmod Pack is a custom modification for the game that adds a host of new features and options.

Here’s a quick rundown of what Valmod Pack has to offer.

This is a really large mod pack that was steadily built over time. It’s primarily a compilation of all lesser mods combined into one larger file. The Valmod Pack is available in two flavors. The Expansion and Overhaul packs.

The Expansion pack is intended to be viewed as an expansion for the game, as the name implies.

It adds a number of new features to the game without significantly altering the main vanilla gaming experience. This is a perfect choice if you’re happy with 7 Days to Die but just want to have more stuff to do.

On the other hand, the Overhaul pack adds the same items and content to the game as the expansion. Unlike the expansion, it overhauls several basic parts of the game, as the name implies.

In general, the recipe system is far more restricted than in vanilla. This update is meant for individuals who seek a fresh take on the game.

What Are the Features of Valmod Pack?

How to Install Valmod Pack 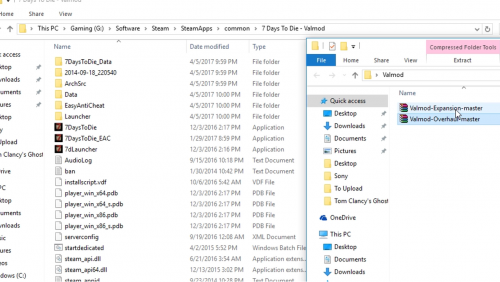